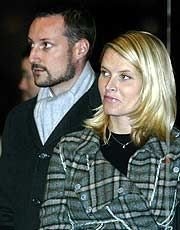 The new successor to the Norwegian throne was born at 9:14 a.m. when Crown Princess Mette-Marit gave birth to a baby girl.

The little princess will become Norways first queen in more than 600 years if she succeeds to the Norwegian throne. Section 6 of the Constitution was changed in 1990 in order to give both genders equal right to inherit Norways throne. The new born child therefore enters the order of succession as number two – next to her father the Crown Prince.

Prime Minister congratulates
On behalf of the Government it is a great pleasure to congratulate Crown Prince Haakon and Crown Princess Mette-Marit with the birth of their daughter," stated Prime Minister Kjell Magne Bondevik in a statement issued by his office. "We congratulate King Harald and Queen Sonja with their new grandchild, and the Norwegian people with a new heiress to the throne."