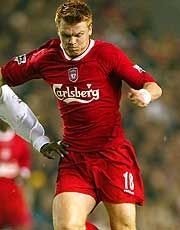 Nike claims John Arne Riise has breached a sponsorship agreement, and the company is now dragging him to court.

John Arne Riise wanted to end his contract with Nike last fall because he claimed the follow-up from the company had been unsatisfactory. He reached an agreement with Nike Norway that they would terminate the contract which was legal until July 31, 2004, however, Nike in the Netherlands claims that Nike Norway does not have the authority to do that.

Agreement until 2004
In the meantime, Riise changed to Adidas, and that is the reason why the Norwegian now is being dragged to court.

John Arne Riise has been connected to us since 1996, and he has a contract which ends in 2004, said Hans Faber, head of Nikes communication department in northern Europe, to the Norwegian paper Dagbladet. We are therefore not at all pleased that he is wearing the shoes of a competitor.

Einar Baardsen, Riises agent, believes the case will be dealt with by before the end of next week.

Compromise
This is not at all dramatic. Baardsen said. The summons from Nike in the Netherlands is just their procedure in cases like these. We have agreed with Nike to reach a compromise. It will be reached in Oslo next week.