Norwegian Krone at an all-time low 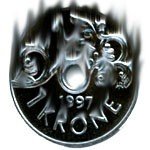 The Norwegian Krone has fallen to an all-time low against the euro. The euro has not been this expensive for Norwegians since March 1999.

Since Svein Gjedrem, head of the Norwegian Central Bank, has removed most of the interest difference between Norway and abroad during the last year. The result is that the foreign exchange speculates see no reason for getting their hands on the Norwegian Krone.

Many players on the foreign exchange market see that Norwegian interest rates may be low for such a long time that it is no longer interesting to have large deposits of Norwegian Krone, said Eirik Larsen, senior analyst at DnB Markets to TV 2 Nettavisen.

Gjerdrem surprised expects when he just before Christmas cut the interest rate once more. The result was a new, massive fall in the Krone exchange rate.

For the average Joe this means that it is more expensive to travel to the most popular sites in Europe and the price of a number of imported goods will increase.

A gift to Norwegian industry

In the short run, the Norwegian industry will be the one that benefit the most from the low Krone.

The lower Krone is very welcomed, Larsen said. We have been in a situation where the Krone has been very strong, something which leads to problems for the export industry. The Krone fall has bee like a gift to the industry.

Larsen said that he does not believe the low Krone rate will continue during the next couple of weeks and months, even if Norges Bank would cut the interest rate in January as well.

The expensive euro is definitely making the vacation trip more expensive for thousands of Norwegians, but there is some consolation for people who love to travel; the American dollar is record low against the Norwegian Krone right now. Friday afternoon the price for one dollar was about 6.65 Norwegian Krone. That price is the lowest it has been in almost seven years.