Sick with the flu, Sigurd beat them all 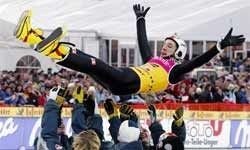 Sigurd Pettersen won the ski jumping Four Hills tournament in Germany and Austria even thought he was fighting the flu. He is now heading home to recuperate.

Pettersen has been fighting with a sore throat since the competition in Innsbruck Sunday. Due to the illness, he skips the World Cup competition in the Czech Republic in order to go home and recuperate.

Im tired, worn and battling a sore throat, Pettersen said to the Norwegian paper VG. From experience, the sandpaper feeling in my throat is normally the warning that Im getting the flu.

He feared that his illness would destroy the entire competition week for him.

I got a sneaking suspicion that everything was not as it should have been after Oberstdorf, Pettersen said. It went well when we got into Innsbruck, but after that I felt that I getting the flu.

Pettersen is arriving at Oslo International Airport with Jan Erik Aalbu, head of Norwegian ski jumping, this afternoon. Pettersens new goal is the World Championship in ski flying in Planica in the end of February.