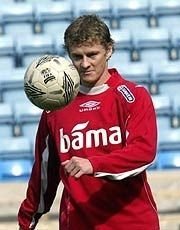 Ole Gunnar Solskjær, age 30, is one of the leading players on the soccer field, and when his career on the field comes to an end, he wants to become a top coach.

The Manchester United star is already busy with planning what he is going to do when his soccer career is over, and he wants to become a coach.

Solskjær will probably test out working as a coach when his career is over, said Jim Solbakken, Solskjærs personal manager, to TV 2 Nettavisen. He is planning to take a real coaching education, and he was about to start with that earlier this fall when he was injured.

Dont need to work in Norway

TV 2 Nettavisen has not gotten a comment from Solskjær himself regarding the coaching training, but his personal manager believes that Solskjær is going to be a great success as a soccer coach.

He is an intelligent and capable guy, and he has skills that no one else has, Solbakken said.

However, Solskjær may not start his career as a coach in Norway.

Its impossible to predict the future, but if its really necessary to go home to start off as a coach, I dont think Ole Gunnar Solskjær has to do that in order to become a coach, Solbakken said. But the day he quits as a player on the all-star team, we hope that the team want to keep Ole Gunnar on as a part of the coaching team. Ole Gunnar supports everything the Norwegian Football Association (NFF) stands for and more.

Solskjær want to continue with his coaching program as soon as he is back as usual at Manchester United.

But this with a coaching career is not important right now, Solbakken said. Whats important for Ole Gunnar now is to recover. He has no spear time right now, but he is working a 100 percent to recover from the injury. A half percent plus or minus may be the difference if he plays or is stuck at the bench at Manchester United. This is may be the most important time in his career.