Sub wreck was a scam 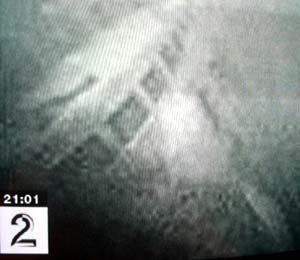 The strange submarine wreckage allegedly located on the coast of Nordmøre was a scam.

Many have been waiting to hear what type of submarine the anonymous man from Aure at Nordmøre filmed with his homemade, underwater camera. However, the bubble busted Thursday when Dagbladets Internet edition revealed it as fake. The only thing the prankster needed was a video film, a computer, and a MMS camera.

The man admitted to TV 2 Nyhetene Thursday evening that it was a joke that snowballed out of control.

The local paper NordvestNytt printed the story Wednesday night, and presented also two pictures that the photographer claimed he had taken. The pictures were of low technical quality because they were transferred from the video screen to a cell phone. The paper still claimed that this was the real thing.

«We know the person who has taken the pictures rather well,» said Odd Thore Erichsrud, editor of NordvestNytt, to TV 2 Nyhetene Wednesday. «He is a credible person who would not falsify such a picture. We know that he is an avid underwater photographer who has also photographed other things.»

The prankster even sent the pictures over to the military and entered into an agreement not to comment the case. Military experts worked all day Thursday with the pictures, but they did not manage to reveal the scam.

Filmed in 1998
The film is actually of a Japanese submarine of the type I-52 that went down in 1944. It is located on 5,000 meters depth, 1,850 kilometers east of Barbados in the Atlantic Ocean. The pictures are from the documentary film «I-52: Search for WWII Gold,» a film made by the National Geographic in 1998.

The only thing the Aure man did was to laterally reverse the video pictures and made it blurry. And by doing this, the man got much coverage in Norwegian media.

Fooled
Editor Odd Thore Erichsrud said he is not at all amused by the mans joke.

«I feel fooled if Dagbladet.no now has gotten the right information,» said Erichsrud to TV 2 Nyhetene.

The Norwegian military sees the humour in the stunt.

«We have to see some of the humour in this and note what has happened,» said Thom Knutstad, press and information officer, to TV 2 Nettavisen.

«We said all along that we could not conclude anything until we got more footage,» Knutstad said. «It indicates that it is you can do a lot with todays technology.»

He concluded that he can not recall that the military have met a prankster like this ever before.